This really is a wonderful idea and if it is to survive the 12 month trial period, it needs, and deserves our support.

A joint initiative between City of Sydney and Marrickville Councils, and in partnership with Bike Sydney, Australia's first 'bike library' consists of a small fleet of cargo bikes and specialist trailers that can be borrowed for up to three days.  Membership and hire fees are very affordable which makes this a perfect option for anyone needing to transport large items or small children [!] or indeed anything that your imagination can dream up.

Launched on Friday by Lord Mayor Clover Moore MP and Mayor of Marrickville, Sam Iskandar, there were jokes about them being able to fit a fridge.  But jokes aside, the Lord Mayor said "we are offering an affordable, convenient, healthy and environmentally friendly alternative to running errands in cars.  This unique library will encourage more people to use bikes to get around their local area".
Citing Alan Jones's anti-cycle ways campaign as hostile, her speech was well received by the group of Sydney's cycling advocates, local community representatives and bike business owners present. 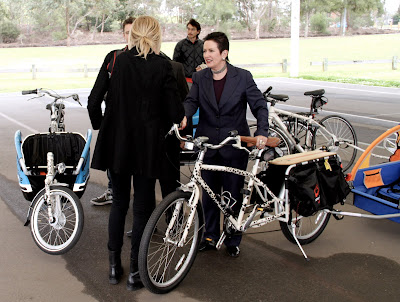 With the Watershed's commitment to sustainable urban living, and Sydney's current push towards getting more cars OFF the roads and more bikes ON them, this has a definite 'right time, right place' feel about it.
Cargo bikes are used widely in Europe but they have yet to become commonplace in Australia, so what are you waiting for ?  Be the first to go and try one out, take your girlfriend/boyfriend/mother, move some stuff, do some shopping or just take the kids out for a spin - trust me they will love it!

Fee Schedule and further details on the Watershed's website here.
Posted by saskia at 10:55 PM